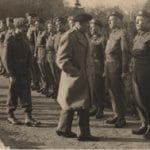 As the war in Europe entered its final phase, both 2nd Battalion, The Gloucestershire Regiment and 43rd Reconnaissance Regiment (ex 5th Gloucesters) stood poised to complete the liberation of the Netherlands and to invade Germany. In the Far East, 10th Battalion were fighting in Burma and 1st Battalion were on internal security duties in Italy.

During the Battle of the Reichswald in February and March 1945 the armoured cars of 43rd Recce with 43rd (Wessex) Division were under the command of Canadian First Army, probing and engaging enemy positions along the Dutch-German border from Cleve to Xanten. Cole Packer and J. Groves recorded one such engagement in their “Record of a Reconnaissance Regiment”, which took place during a patrol on the edge of the Reichswald:-

“. . .6 Troop [B Squadron] was in the lead, commanded by Lieut Joslin, and supported by three tanks. Approaching Niederdam, everything appeared to be quiet, but when the cars were well in among the houses Lt Joslin suddenly saw a German officer with a plate of breakfast in his hand. Then things began to happen. Bazookas [Panzerfausts or Panzerschrecks] opened up, and three cars were knocked out, leaving Lt Joslin’s car and the leading car undamaged. Among those missing as a result of this action were Sgt Renvoize, Tprs Hayward and Hodes. As Lieut Joslin withdrew he saw a German half-track appear along a side track, and he brewed it up with a shot from his 37mm. Strangely enough the leading car, turning round, and picking up some of the crew of the cars which had been knocked out, succeeded in withdrawing to safety.

“Meanwhile the supporting tanks had fared worse, and an S.P. gun had knocked out all three of them. It was evident that the enemy was holding the area strongly, and B Squadron was withdrawn.”

43rd Recce crossed the Rhine into Germany on 27th March and ended the war just short of Bremerhaven.

2nd Battalion, The Gloucestershire Regiment with 49th Division spent most of the miserable winter of 1944/45 on the “Island” among the flooded fields of Holland, at Elst between Nijmegen and Arnhem. The liberation of the Netherlands after the failure of Operation Market Garden was long and difficult, attracting little of the resources or publicity afforded to other sectors of the Western Front. If 49th Division had acquired the sobriquet “The Polar Bear Butchers” from the German propaganda machine during 1944, then they had acquired from a different source the sobriquet of “The Lost Sheep” in 1945. The Bristol Evening World of 10th April 1945, paraphrased the words of Captain Hedley Holgate of 2nd Battalion who:-

“. . . attributed the title to other divisions which passed through the area several times and always found “The Lost Sheep” sitting around Nijmegen and besieging Arnhem. The battalion itself had had a static but tough winter in and around Nijmegen “island” and had had several short and sharp engagements with the Germans.”

Nevertheless, it was 2nd Battalion with the rest of 56th Brigade who, with a range of air, artillery and specialized armour and engineer support, finally captured Arnhem in a well-planned amphibious operation between 12th/13th April. The preparatory moves were described by Lieutenant Burkart:-

“During the day of the 12th April, Typhoon attacks were made by the R.A.F. on various targets connected with the operation, including the area of the fort, which was shot-up with rockets. At 8.40 p.m. – H hour minus two – the timed artillery programme began, reaching a crescendo during the last hour. The artillery support itself was provided on a reasonably heavy scale – not as great as during some previous operations – but two especial features were the use of “mattresses” and the “pepper-pot”. The “mattress” was a land based version of the multiple rockets fired from naval craft during the Normandy invasion, and one “mattress” had a very much greater effect than a normal shoot by a regiment of artillery. The “pepper-pot” was the use of all spare weapons under divisional command – in this case including heavy mortars, machine guns, A/tank, tank, and A.A. artillery – in a harassing role on the back areas of Arnhem. The purpose was to frustrate any movement or concentration of reinforcements, ammunition or supplies and was aimed at likely targets, rather than confirmed centres of enemy defence. In this way too it was possible to bluff the enemy as to the direction of the attack, without at any time sparing any of the targets essential to its prosecution.”

2nd Battalion were still in the Netherlands at the end of the war in May, having seen further actions against the Dutch S.S., and only entered Germany on 25th May nearly three weeks after the German surrender. Here they were based firstly at Soest, and then Berlin until they returned home in October 1946.

The prisoners of war who had been captured in 1940 and who had managed to survive their period of incarceration, were already home. Conditions for the prisoners, which had been good in the early stages of the war, were appalling by 1945. One survivor was Private H.R. Tarrant of 2nd Battalion, who had an extraordinary journey home after his German captors abandoned him in his sick-bed with frostbite on 22nd January. After much travelling, considerable hardship, and various adventures, and but little help from the Russians, he met at Krosno (after leaving a Polish friend sick in hospital there) another Pole who spoke perfect English and who wanted to go to Britain. (Private Tarrant’s spelling of place names is often quirky and they are sometimes unidentifiable):-

“. . . We hitch-hiked by lorry back to Kracow to get him registered as a British soldier and myself as his cousin (who only spoke French and Polish) at the Church Mission. I registered myself as George Smith, Gloucester Regt., Home Address: 21 St Paul’s Road, Salisbury, Wilts. I cannot remember what name I gave him to tell them. We stopped at a Resistance House in Kracow two days. We then went by goods train back to Crosnoi. We waited a week for my friend to come out of hospital. He had T.B. – we did not tell him. We left. I was in charge (taking all risks with their papers on me) and hitch-hiked across the border into a little village in Czechoslovakia and stopped the night. We left by train, and arrived at Kosetta where the civilian population would not have anything to do with us. We could not go on because of curfew hours. So we had to approach the Russian Embassy for a night’s sleep and food, trusting it would not be found out that among us were two Poles. I had learnt a little Russian and spoke German very well. The English-speaking Pole acted as interpreter. We were taken to a cafe and the Russian with us demanded a meal for us. We were then taken to a house where the people spoke English, but I did all the answering and covered us all; my [Russian] friend was worried to death. I told him not to worry; if anything happened I would say he did not know they were Poles but thought they were Angleechan, that is Russian for English. We were fetched in the morning and given tobacco and paper money and then told we were being given an escort. We thought it was to cross the corner nearest Yugoslavia, crossing both Hungary and Czechoslovakian borders.

“No fear, we were being taken to Moscow; we left on horse and sleigh and travelled daily until arriving at Norcsans.

“In the morning we were on a lorry. We stopped at different places en route, the only one I can remember was Sannok. We went through one place that hardly had a brick left standing. I think it was Jazelow, that was, before we reached Sannok. We arrived at Lemberg (Lwow) at 4 p.m.; the lorry was dumped. We were left on the station by the guard to await the 5.30 p.m. train to Moscow. A stationmaster came up and I was informed by the interpreter that when the guard returned he was to see him as we were not to board the train. . . . [The] Following morning we were taken before the British Military Mission Security who had arrived at Lemberg two days before. I was told I was taking a great risk with my two Polish patriots but was told what to do on being interrogated by Russians. . . . We left here by train for Odessa but went via Kiev so as our escort could have a day at home. We arrived at Odessa and were put in barracks with a few hundred P.O.W’s (dated approx March 29th 1945). We were interrogated and I got these Poles through without quaking in my shoes. We were given our boat ticket and left Odessa on April 15th.

“We stopped at Naples, picking up wounded soldiers and an escort and convoy. We stopped at Gibraltar, eventually landing in Glasgow about 28th April. I left these two Poles on board the S.S. Nieu Holland and have never heard from them since. I should like to know how they are getting on.

“I went with several other British soldiers to 110 Clearance Camp, Haslemere, Surrey. I went on leave from there arriving home in May (V.E. Day).”