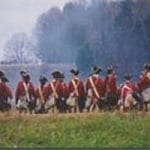 The Battle of White Plains was an inconclusive action fought on 28th October 1776 outside New York with about 4,000 men engaged on each side – the British under the command of Major General Sir William Howe, the Americans led by General George Washington. The battle came about as a result of Howe’s efforts to threaten Washington’s lines of communication, while keeping New York safe in British hands. The 28th Foot were present in Second Brigade with the 5th, 35th and 49th Regiments.

Sir John Fortescue describes what happened in his History of the British Army:

“… his [Washington’s] front being everywhere covered by a deep river called the Bronx, of which every ford was defended by powerful works. At the same time he prepared another camp at White Plains, fronting to the south, so as to check the march of the British northward.

“Meanwhile, Howe advanced slowly with his thirteen thousand men in two columns, and on the 25th encamped on the Bronx, about four miles from White Plains. Washington therefore on the 26th shifted into his new camp on that spot, leaving, however, a division of four thousand men under Colonel Spencer in a bend of the Bronx to his right front, and separated by that river from his main body. On the 28th Howe continued his advance; and Colonel Rahl of the Hessians, perceiving that this isolated corps had omitted to occupy a hill which commanded its flank, at once sent a battalion across the river to seize it. Howe then directed the Second Brigade with two Hessian battalions against the front of Spencer’s division, while Rahl moved upon its flank; but the frontal attack being prematurely delivered, the losses of the British were unduly heavy, and though the Americans were driven gallantly from this strong post, no solid advantage was gained.”

Washington remained in position for a few more days, but despite his strengthening his defensive earthworks, retreated on 1st October when the British brought up reinforcements.

The attack by the 28th Foot in company with the 35th provided an alternative or additional explanation of the regimental nickname of ‘the Slashers’. As they advanced towards the American position, their way was hampered by the long grass through which they marched. Using their swords and bayonets like machetes, the 28th slashed their up the slope before charging and driving the Americans from their position at bayonet point.

Picture: Re-enactment of the Battle of White Plains.