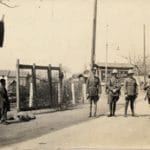 After the end of the Great War, 2nd Battalion, the Gloucestershire Regiment were posted once again to India. On 27th January 1927, the battalion set sail from Bombay to Shanghai as part of 9th (Jhansi) Infantry Brigade), the lead element of an expeditionary force gathering to protect the International Settlement from the ravages of the Chinese Civil War that was threatening the city of Shanghai. For seven weeks the Gloucesters stood by to protect the Settlement to the north of the city walls.

The Daily Mail correspondent of the time reported:-

“SHANGHAI STIRRED – – – MEN, WOMEN AND CHILDREN GREET BRITISH TROOPS – – – (From Sir Percival Phillips) Shanghai, Monday, February 14th. No strangers have ever stirred this cynical cosmopolitan city so deeply and so diversely as did the lads from two English counties, 1,500 of them in the familiar khaki, when they marched this morning with shining bayonets and singing English airs through the heart of the International Settlement, a living pledge for the protection of British life and property.

“From the moment the 2nd Gloucesters and the 2nd Durhams set foot in the squalid dockside quarter of Hongkew at 11 a.m., they felt that though they are on the other side of the world, they are still home; for they seem to find England all the way of their march and the welcome astonished and delighted them.”

Their five month stay was at first taken up with the manning of barricades and showing the flag, in order to deter encroachment and infiltration by the rival Northern and Southern Chinese armies, particularly the Communists. The two British battalions and 3/14th Punjabis were greatly exposed should a serious offensive have materialized, but as reinforcements poured in from stations around the British Empire, and other nations began to send their own task forces to protect their interests in Shanghai, the situation stabilized, although not without some outbreaks of heavy fighting.

The British troops were subject to some clumsy propaganda efforts from the Chinese Communists which failed to make any impact upon the soldiers. One such effort by the Shanghai Defence Force Revolutionary Soldiers Committee was directed at the Military Tattoo held in honour of King George V’s birthday, itself a propaganda exercise designed to put heart into the British community and impress the locals. Dubbing it the “Devil’s Tattoo”:-

“. . . The Shanghai Tattoo is not intended as a birthday compliment to his B—. Majesty. In reality it is a vulgar, arrogant, provocative display of pride and force on the part of the local authorities and british militarists. In their ignorant fear and rage they hope thereby to intimidate the Chinese into the continued acceptance of british Imperialism. Like a cat hunching its back when confronted by a enemy; trying to make itself look more ferocious and powerfull than it really is; the Shanghai die-hards and british military braves have arranged this Tattoo so as to strike fear and terror, by a display of men and munitions, into the hearts of Chinese workers and nationalists. . . .”

The programme for the “Twilight Tattoo” which commenced at 9.30 p.m. on 3rd June 1927, and which so terrified the Communists, ran as follows:-

On 23rd July 2nd Battalion and the rest of the Brigade left Shanghai and returned to India, where the Gloucesters were to remain until December 1928 before returning to England.

Picture: Officers and men at a checkpoint in Shanghai.