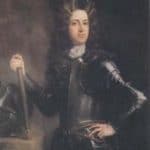 Of the four great battles fought by the Duke of Marlborough in the War of the Spanish Succession, (Blenheim, Ramillies, Oudenarde and Malplaquet) De Lalo’s Regiment was present at only one of them – the greatest of them all, Ramillies, 1706.

“Marlborough cannot be robbed of the laurels of Ramillies. The Schellenberg, his detractors said, had been won by the Margrave. Blenheim was the conception and the achievement of Prince Eugene. But neither of these explanations covered the amazing events of May 23. Here the world saw Marlborough alone, without a council of war, achieving a military masterpiece seldom equalled and never surpassed. This was his victory, and his alone. Ramillies belongs to that rare class of battles fought between equal forces of the highest quality wherein decisive victory at comparatively small loss is gained through the manoeuvres of the commander-in-chief. It will rank for ever with Rossbach and Austerlitz as an example of what a general can do with men.”