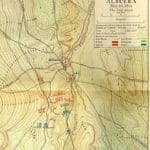 1810 had seen the Allies on the defensive, and Wellington had retreated back to the Lines of Torres Vedras near Lisbon, after fighting a successful delaying action at Bussaco. The 61st Foot were present at Bussaco, as was the newly arrived second battalion of the 28th Foot (2/28th), but neither took much part in the fighting. Marshal Massena’s starving and much depleted army had been compelled to retreat, and in 1811, the Allies resumed serious offensive operations.

On 5th March 1811 the first battalion of the 28th was present at the battle of Barrosa, in southern Spain. 1/28th had returned to the Peninsula in January 1810, forming part of the garrison of Gibraltar, which was under the command of Lieutenant General Sir Thomas Graham. A series of aggressive operations in early 1811 against the French forces besieging Cadiz culminated in Graham’s victory at Barrosa. The 28th had been heavily involved, under the command of the charismatic Major Browne (“El Commandante Loco”), in the temporary absence of Lieutenant Colonel Belson. Belson had returned to take command of the battalion, and Browne (already with a brevet rank of Lieutenant Colonel) was given command of a battalion of flank companies, which included the Grenadier and Light companies of the 28th. Lieutenant James Archibald Hope of the 92nd Highlanders, watched the 28th’s fight with the French 54eme Regiment de Ligne at Barrosa:

“Some officers of another Regiment doubted the 28th would be able to repel the assault of so superior a number of the enemy. On hearing this Major B. who well knew what the “Bragge Slashers” could do galloped over to the doubters and offered thirty dollars to one that the 28th would “thrash the rascals” soundly. The bet being declined the Major soon after, and on seeing the storm thickening, pulled out his purse and holding it up, cried “This purse of gold to a dubloon, the Bragge Slashers will lick them yet.” The bet being taken and the 28th having repelled the enemy’s attack, Major B. rode up to the taker of the bet and very coolly said, “The Dubloon, if you please Sir.””

Meanwhile, on the Portuguese/Spanish border, Wellington had divided his forces in an attempt to seize the fortresses which were guarding the gateways into Spain. The 61st were in 6th Division and remained with Wellington’s command in the north, taking part in the investment of Almeida, as well as being spectators at the battle of Fuentes d’Onoro. In the south, 2/28th were in 2nd Division, where Marshal Beresford’s Anglo-Portuguese army with its Spanish allies was blockading Badajoz, when Soult’s relieving army attacked at Albuera on 16th May.

Lieutenant Colonel Abercrombie of the 2/28th, son of the illustrious Sir Ralph Abercrombie who had fallen mortally wounded at Alexandria, was in command of 2nd Division’s second brigade, comprised of his own battalion as well as the 2/34th and 2/39th. 2nd Division suffered horrendous casualties in the battle, but especially in its first and third brigades, where 1/3rd (The Buffs, the old parent regiment of the 61st) lost 643 men out of first brigade’s total loss of 1,413; and 1/57th (who now acquired the sobriquet ” The Die-Hards”) lost 428 men out of third brigade’s total loss of 1,044. By comparison, second brigade got off lightly, but, even so, 2/28th lost the most men from their brigade, 164 out of a total loss of 390. Beresford’s gloomy despatch after the hard-fought and narrow victory recorded this tribute to Abercrombie’s men:

“The 2nd Brigade of the 2nd Division had behaved throughout the day with the most distinguished prowess: the 28th, 34th and 39th regiments vied with each other in discipline and valour and executed movements under the hottest fire with admirable precision. The conduct and able dispositions of the Hon. Col. Abercrombie were worthy of the renown of his father.”

Picture: Map of the Battle of Albuera – The final French attack.