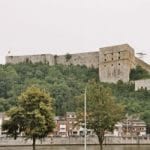 The Regiment first raised in 1694 by John Gibson was sold by him in 1704 to Colonel Sampson De Lalo, a Huguenot exile in England. De Lalo’s Regiment was still in England when the Duke of Marlborough won his great victory at Blenheim, but arrived in Flanders in time to take part in forcing of the Lines of Brabant. The lines were over seventy miles long, reaching from Antwerp to Namur. Their purpose was to sufficiently delay any assault to give enough time to concentrate a large army that would overwhelm any would-be attackers. De Lalo’s Regiment was one of seven in Ferguson’s Brigade which opened the campaign against the Lines with an assault on the fortress town of Huy, which quickly fell on 11th July 1705. Once this had been achieved, the penetration of the Lines could begin proper, and on the night of 17th/18th Ferguson’s Brigade was on the right flank of the army. De Lalo’s Regiment took the village of Neer Hespen and rushed to cross the River Gheete before storming and breaking through the fortified Lines in front of them. Pioneers quickly laid pontoons across the river enabling the Allied cavalry, with Marlborough at their head, to charge and sweep the French before them.

Picture: The Fortress of Huy