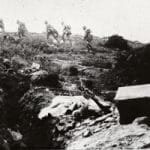 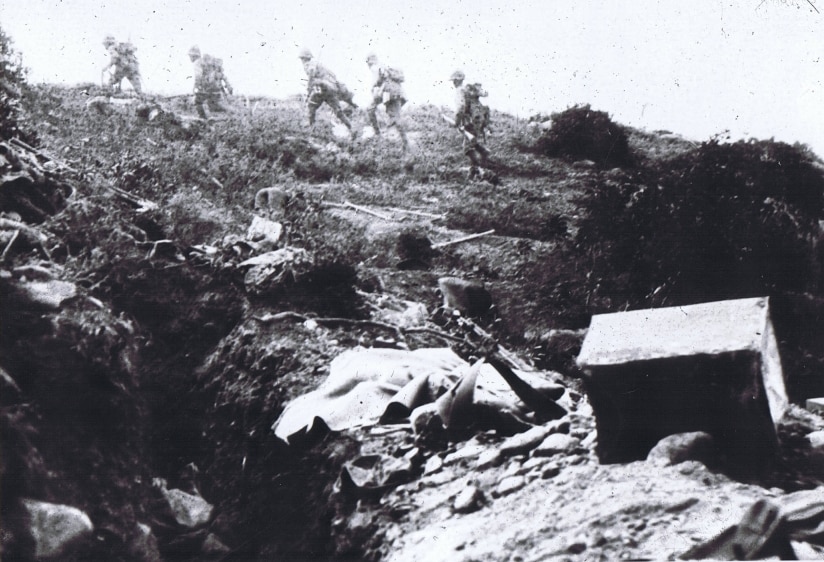 Once the hundreds of thousands of volunteers who had rushed to join the British Army were allocated to their various regiments and corps and trained for war, so the size of the British armies on campaign overseas swelled in numbers. 1/4th, 1/5th and 1/6th Territorial battalions of the Gloucestershire Regiment were the first to join the two Regular battalions, landing in France in March 1915. Soldiers of the New Army, in 8th, 9th, 10th, 12th and 13th Service battalions followed the Territorials into France, and on 11th July 7th Battalion landed on the Gallipoli beaches.

The Gallipoli front had been opened as a result of the Royal Navy’s failure to clear the passage of the Dardanelles Strait, dominated as it was on either side by Turkish shore-based artillery. The landings made in April had secured for the Allies a precarious foothold on the Gallipoli peninsula, and both sides had sustained heavy losses. 7th Battalion, The Gloucestershire Regiment saw its major commitment to battle in the attempt to take the hill of Chunuk Bair, just inland of Anzac Cove. On 7th August the battalion went into battle almost 1,000 strong, but only 181 emerged from it completely unscathed, the rest being either killed or wounded. Of the battalion’s twenty officers, ten were killed and ten were wounded.

Private Domican from Bristol, who had to have his right hand amputated as a result of a wound he had suffered in the battle, recalled a few months later:-

“The big attack took place on Sunday morning. As soon as day broke we had orders to rush for the ridge, about 600 yards away, in extended order, and this we did amidst a hail of shrapnel. Our orders were to extend out two yards, take all possible shelter, and one man was to dig and the next one to open fire on the enemy who were about forty yards away.

“It was my duty to follow out the firing order while my companion was digging. I was struck in the face by shrapnel early in the attack and my wrist was shattered. With some 250 Australians [actually New Zealanders], Ghurkas, and Gloucesters, I remained in the gully until eight o’clock in the evening, shells continually bursting in the vicinity.

“When sunset came those of us who were able crawled back to our lines and had our wounds attended to. We, of course, heard the firing all day on the ridge, and afterward learnt of the terrible losses which the 7th Gloucesters and other regiments had suffered both in men and officers.”

The Royal Gloucestershire Hussars, who had been part of the Territorial Forces since 1908, arrived in Alexandria in Egypt on 24th April 1915, a mounted force 537 strong, without having lost a single horse or mule on the voyage. Training, escort and guard duties came to an end when the Regiment was ordered to Gallipoli on 11th August, but to leave its horses behind. As with so many others who had landed there before them, the Hussars landing was not unopposed. Second Lieutenant Edgerton Cripps noted in his diary for August 19th:

“. . . The boat we went in was oddly enough a Bristol pleasure-steamer: much appreciated by the Bristol Troop! We put off at dark and steamed for five hours. I slept on the boards well, with my pack under my head. We landed . . . as luck would have it, ran up against the Gloucestershire transport, such as it is, and put my valise down and joined up. Very glad to see them I was, about sunrise yesterday morning. We marched on up from the landing-stage and lined up on the side of the hill, just above the landing — very broken ground, with low, thorny scrub, rocks and stones on a clayey soil. They began to shell us, or rather the next landing party, so we dug ourselves into temporary graves! — you can’t call them anything else — with head-stones to protect us. Mine is just long enough to hold me, two feet deep, piled up all round with earth, a stone at my head, two pieces of wood I found floating in the sea in the middle of each side, and my mackintosh sheet as a sun shelter. . . .”

“The advance of these English yeomen was a sight calculated to send a thrill of pride through anyone with a drop of English blood running in their veins. Such superb martial spectacles are rare in modern war. Ordinarily it should always be possible to bring up reserves under some sort of cover from shrapnel fire. Here, for a mile and a half, there was nothing to conceal a mouse, much less some of the most stalwart soldiers England has ever sent from her shores. Despite the critical events in other parts of the field I could hardly take my eyes off the yeomen; they moved like men marching on parade. Here and there a shell would take a toll of a cluster; there they lay. There was no straggling; the others moved steadily on; not a man was there who hung back or hurried.”

For the next six weeks the Royal Gloucestershire Hussars were in and out of the front line around Chocolate Hill and Cator House trenches. Second Lieutenant Cripps noted in his diary for August 26th:-

“Am in a dug-out in the firing trench. Came up last night and was sent with my men to dig a new communication trench in the dark. Boring performance, as they sniped at us in the moonlight all night. Got the men back to the trench at 2 a.m. went to sleep – very smelly – four dead Turks found buried in the corner! We buried over 30 in front of the communication trench last night. . . . This morning had such a good breakfast, as Pemberton (machine gun officer, Warwicks), who is with me had some rations – bacon and jam – which he shared with me.

“Sniping goes on all the time. One man spots, the other shoots. I had ten shots at one man making a trench 950 yards, and hit the bag last two shots. Such fun! I get so keen I could go on all day, only it means putting your head over the trench to fire and I am much too careful of my skin. You can’t imagine how interesting and beastly it all is. I quite enjoy it in an extraordinary way that I can’t explain. The shelling is the worst part. They gave us a doing last night and found our camp for the first time. The men bolt like rabbits, and only two were hit.”

By 17th October the Royal Gloucestershire Hussars were down to an effective strength of 95, all ranks, with battle casualties and, more decisively, disease, having taken their dreadful toll.