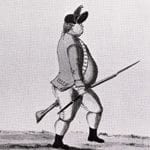 1768 produced a comprehensive set of instructions in the form of a new Royal Warrant for the army with regard to their dress, accoutrements and equipment. Each regiment was expected to comply with these regulations, and much attention was paid to the often minor but proud distinctions of uniform detail applicable to the diverse regiments, paying particular regard to the changes that had been made since the last Royal Warrant of 1742. Inspections became more frequent as standards had to be met.  The 28th Regiment of Foot was the subject of an Inspection Return on 28th May 1768:

“8 Fifers. Officers – coat with silver embroidered button-holes, cross pockets, lapelled to the waist with bright yellow; yellow cape; a small round cuff – silver buttons numbered; silver shoulder-knot. White waistcoat and breeches. A Company, called the Light Infantry Company, appeared clothed in short coats and caps, but have notwithstanding proper clothing like the other companies, when required to be worn.”

The Light Infantry Company mentioned above was a hangover from the Seven Years War, as such Light Companies were not officially to be included on the establishment of line infantry regiments until 1770. The 28th were unusual in retaining a Light Company as most other regiments which had seen active service dissolved theirs at the end of the Seven Years War in 1763.

An Inspection of the 61st Regiment of Foot at Minorca in 1781 produced this report: