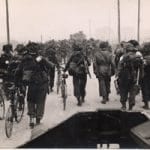 After 2nd Battalion and 5th Battalion of the Gloucestershire Regiment returned to England from France in 1940 they were brought up to strength, retrained and re-equipped for the invasion of Nazi-occupied Europe in 1944. 2nd Battalion remained an infantry Battalion but 5th Battalion was converted to 43rd Reconnaissance Regiment which, equipped with armoured cars would act as the eyes and ears of 43rd (Wessex) Division in 1944-45.

2nd Battalion came ashore at Gold Beach on 6th June, D-Day, as part of 56th Brigade, which was the first allied formation to enter Bayeux the following day. During the build-up of the Normandy bridgehead 56th Brigade was an independent formation used to bolster up other Divisions where required, and began the invasion attached to 59th Division. Besides 2nd Battalion Gloucestershire Regiment, 56th Brigade contained 2nd Battalion South Wales Borderers and 2nd Battalion Essex Regiment. Its formation sign was a yellow sphinx on a black half circle, chosen because all three regiments had taken part in the Egyptian campaign of 1801.

Lieutenant Frank Clarke’s platoon flushed some Germans out of a cellar in a house in Bayeux:-

“. . . I ordered the bren-gunner to methodically ‘test’ the likelihood of occupation, and very quickly after a few bursts, commotion was the order of the day from down below. Up they came, twelve all told. I lined them up against the outside wall, and quickly searched them. But not quickly enough. By this time a sizeable audience of mostly women and girls had gathered, plus a dozen or so men. Two of these men seemed to have had a score to settle, as they rushed forward, fists and boots flailing, attacking the hapless Germans, and it was not until I threatened to shoot them, that they backed off. No doubt they could well have been justified in their actions. I was not to know. Quickly I dispatched them, under guard, back to the beaches. Then the girls let their hair down. The whole platoon was swamped with heaving female bodies. Phew! What a way to start an invasion.”

On 9th June 56th Brigade came under the command of 7th Armoured Division and 2nd Battalion was soon involved in the ferocious fighting for Tilly-sur-Seulles, coming up against the elite and powerful Panzer Lehr Division. Captain Holgate recalled the confused fighting in the village on the evening of 11th June:-

“Corporal Braid, of No. 13 platoon, hearing amidst the din a heavy rumbling on the road outside, looked out of a window ready to welcome a 7th Armoured tank. Instead, he saw, and they saw him, a German Mk IV with a section on it armed with Schmeissers. The Boches piled off the tank in quick time and No. 13 platoon left the house equally quickly, leaving behind their small packs and shovels which they had discarded during the house searching. They had no answer to the pounding this tank shortly gave the houses in which they had been.

“The AVREs which should have supported the two leading companies had found the country too difficult for them. Only one managed to get up with “B” Company and with “C” Company. They did some useful work with their block-busters but all eventually became stuck or lost their tracks, leaving no alternative to the crews but to fire them and join the rifle companies.”

Tilly finally fell to the British on 19th June, and Panzer Lehr was all but destroyed.

By 12th August, 56th Brigade was back with 59th Division, and 2nd Battalion was to take part in its hardest fight of the Normandy campaign at Thury-Harcourt. With not enough time for an adequate reconnaissance of the enemy positions, the Gloucesters soon found their plan of attack in difficulties and were forced to withdraw, after leaving the town in flames. Captain Nash concluded his recollection of the day’s battle:-

“. . . Thury-Harcourt, for sheer noise and stonking, was one of the worst battle we had throughout the campaign. . . After the battle the squadron commander of the 34th Armoured Brigade summed up the efforts of the 61st [2nd Battalion, Gloucestershire Regiment] by saying that never before had he seen men fight with such bravery and determination against such fearful odds.

“We were all very depressed after this battle, and our morale was not improved by hearing on the B.B.C. an eye-witness account of how our troops captured Thury-Harcourt. That really was the last straw.”

However, the Germans had withdrawn at the same time, having suffered severely themselves, and left the village unoccupied when the Gloucesters entered it the following day.

On 19th August, 56th Brigade was transferred to 49th (Polar Bear) Division and 1st British Corps in Canadian 1st Army. Between 23rd and 28th August 2nd Battalion was involved in some fierce fighting with the rearguard of the retreating German Army, until they arrived on the outskirts of the port of Le Havre. Le Havre had been well prepared for a prolonged defence by the Germans, but the British assault was efficiently planned and conducted, and the town was taken in three days, falling on 13th September. Major Chalmers recalled the plans for the final storm to be carried out by the Gloucesters:-

” . . . “D” Company with its tanks was to lead the way on the main axis and their first task was to take the fort. In the meanwhile, “A” Company, supported by tanks, was to find out the “form” on the right.

“A plan was made. The tanks were to shell the fort, the 3-in. mortars were also to bombard it, and so accurate that their bombs were dropping in the centre. One platoon was to advance down the road to cover the mine-clearing party and one platoon loaded up with P.I.A.T. ammunition was to move round the right flank and create as much diversion as possible. The third platoon would pass through the covering platoon and break into the main entrance – in fact, the only entrance (the walls were quite unscalable). The shelling sufficed. The white flag was hoisted. The leading platoon then made its way into the fort, lined up the Germans in their hundreds, who were well armed with baggage, having obviously prepared for a surrender! In the fort were also found four R.A.F. personnel overjoyed at their liberation, thirty Algerians, who, as one of them said, expected to be taken away as slaves, and a few French girls, who stated that they had been looking after the comfort of the Germans, and thirty Italians. C.Q.M.S Burnett was very quickly on the spot with “D” company’s three-tonner to take advantage of a very well stocked cellar. He was hotly pursued by all the other C.Q.MS.s.”

For the rest of 1944, 2nd Battalion advanced with the Canadian Army through Belgium and into the Netherlands, fighting numerous minor engagements along the way, and ended the year at Elst, between Utrecht and Arnhem.

On 24th June 1944 43rd Reconnaissance Regiment were aboard MT 41, the troopship DERRY CUNIHY, just off the Normandy coast when a mine exploded against the hull. Major Desmond Scarr recalled:-

“The troops were still below and most of us in bed when a violent shudder shook the ship. I saw the wash-basin on the wall of my cabin fly off its brackets and end up on the floor. I had no idea what had happened but presumed we had had a direct hit from one of the coastal guns. As I started to throw on my clothes my cabin mate, the sailor, who had been on duty, rushed in and out shouting “Quick – you have no time to dress – get out!” However, I completed dressing which took a few seconds and went out on to the deck. I quickly came to a yawning gap of several yards and in front of me was a scene from Dante’s Inferno which I simply could not grasp. The stern part of the ship had fallen away and was low in the water. On the as yet unsubmerged deck, part of which was in flames, lay several bodies. An ammunition truck near mew was on fire and feeling rather useless in that there was no way one could reach the stricken part of the ship, I turned a water hose onto the vehicle. Soon small arms ammunition started to explode, adding to the general mayhem. Shortly after that we were told to get aboard a small craft which had come alongside.”

The regiment lost 180 dead and 150 wounded in the disaster but, with reinforcements and replacements, was operational by the end of the month. 43rd Division had already been sent into action in the Normandy bocage, with 43rd Reconnaissance Regiment joining them to act to front and flanks at Mont Pincon, the Rivers Ornes and Noireau, and crossing the Seine on 26th/27th August. To reach the Seine the regiment had raced 120 miles in 20 hours but, once across the Bailey bridge erected by the Royal Engineers, 43rd Recce had a worrying few hours. The Regimental chaplain, the Reverend J.E. Gethyn-Jones (who would be awarded an MBE for his bravery during the sinking of the DERRY CUNIHY) recalled:-

“Soon after crossing R.H.Q. and part of ‘A’ Squadron and some attached arms (A/A and A/Tk) received marked attention from Boche mortars and there were 12 casualties. During this “stonking” the bridge was hit and temporarily put out of action and the counter attack was on. Prisoners reported that some Boche reserves had been rushed up by cycle from Beauvais. A few Cromwell tanks, four I think, were ferried over that afternoon – what a heartening sight they were – and slowly but surely the bridgehead (the first British bridgehead over the Seine) was widened as the Infantry followed up and occupied the villages and positions that the Squadrons had cleared in ands around the Forest.”

43rd Recce continued to perform its allotted task during the liberation of France, Belgium and the Netherlands, including the Market-Garden campaign in September, and ended 1944 at Heerlen in the Netherlands.

Picture: Soldiers advancing inland from the Normandy beaches. Thought to be “B” Company, 2nd Battalion, The Gloucestershire Regiment.