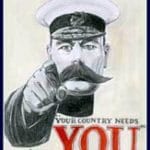 Within a week 1st Battalion, The Gloucestershire Regiment had left their quarters near Aldershot and crossed to France as an integral part of the British Expeditionary Force (BEF). Taking part in the retreat from Mons, they distinguished themselves in what later became known as 1st Ypres at Langemarck and again at Gheluevelt, before the battle front stabilised into the stalemate of trench warfare – a stalemate that was to last for the next four years.

Private Barton of No. 4 Platoon, “A” Company remembered the hot firefight at Langemarck on 23rd October:

“. . . Our casualties were mounting rapidly. In the left traverse of the trench only one was left out of 7 and in my traverse, the second from the left, only 2 were left out of 6.

“Ammunition was becoming scarce, all the wounded and killed were searched for ammunition. The attack from the Farm Road was again pushed on and reached a point 75 yards from us where it was held. The fire from the ditch was so intense that practically all the bayonets in the trench were broken. When hit by bullets they snapped like glass and the fragments were responsible for 7 head and neck wounds. 2 of which were serious.

“. . . Shortly after 1 p.m. the enemy fire died down from the ditch and quietened from the front. Some men ran from the village under Sergt. Wilson and brought more ammunition. The Germans were then seen to be trickling in small parties down the ditch in retirement. The platoon, now respectable in numbers kept up a continuous fire on them and caused a great number of casualties. Strangely enough we were not again fired on. This continued for an hour or so and the line in front which had attacked from the Farm Road were seen to be making movement. They arose in groups of 5 and 6 and as we were at point blank range and waiting for their movement they were all mown down, immediately after rising. No man reached the shelter of the road.

Meanwhile, 2nd Battalion was on the other side of the world at Tientsin near Beijing in China, being the British contingent of an International force which also included French, Russian, German, Austrian, American and Japanese troops. On 1st August the German commanding officer, Lieutenant-Colonel Kuhl, wrote to the British commander regretting the movement of his troops, concluding:-

“. . . The friendly relations which have always existed between us remain a very pleasant memory.”

“. . . On my own behalf, and that of the officers N.C.O.s and men of the British troops under my Command, I can only say that we sincerely regret the severance of those friendly relations – a severance which we earnestly hope may only be a temporary one.”

2nd Battalion left China the following month and on December 19th 1914, they landed in France.

As soon as the war had broken out, the Territorial battalions were mobilised and went into a period of intensive training, not seeing their first action until the next year. As volunteers rushed to fight for their country, the Territorial battalions destined for overseas service were divided and then brought back up to strength. 1/4th, 2/4th, 1/5th, 2/5th, 1/6th and 2/6th Battalions of the Gloucestershire Regiment were all destined to play their parts on the Western and Italian Fronts.

Private Henry Buckle of 1/5th Battalion, who was something of an amateur photographer and artist, noted in his diary, while training near Chelmsford:-

“My giddy aunt, what a parade, the only thing was we were nearly all the same colour, misfits galore. At the dinner hour we had a general swop round with caps and tunics, resulting in a much more presentable appearance this afternoon, like a row of Turveydrops from Bleak House.

“What rumours today, millions of Russians passed through last night, France must be full and we are going to Egypt or somewhere hot, for there are trucks of pith helmets at the station! But cannot meet anyone who has actually seen either Russians or Helmets so far.”

Additionally, as a flood of volunteers poured into recruiting stations in response to Kitchener’s call to arms, several New Army battalions were raised from around the county including Bristol, Cheltenham, Gloucester and the Forest of Dean. Seven of these were raised in 1914, and more would follow. Later, too, additional Special Reserve Battalions were raised which acted in support of 3rd Battalion as training battalions. As the year wore on, these raw recruits eventually received their uniforms and arms and they too went into training to become part of the great British Army of the later years of the war.