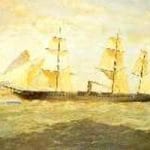 On 19th December 1875 the 28th North Gloucestershire Regiment, 973 strong, left Malta aboard the troopship HIMALAYA, bound for Hong Kong. Their leaving was much regretted as a farewell address published in The Malta Times shows:-

“The painful task of saying farewell to this gallant Corps, under the command of Lieut.-Colonel C.A.S. Dickins, is rendered doubly difficult by the fact that all its ranks are very highly esteemed by all those with whom they have here been brought into contact. We think we are quite correct in saying that during their stay here perfect good will has existed between them and the inhabitants all of whom, we doubt not, will now join us in wishing them every success and prosperity. The high state of discipline and order of this Regiment will be, no doubt, fully acknowledged by His Excellency, the General Commanding, and the British Army should, in our opinion, be proud of possessing a Regiment whose officers have proved to be so gentlemanly, upright, and soldierlike, and whose non-commissioned officers and rank and file are so renowned for their steady conduct.”

The HIMALAYA arrived in Hong Kong on 31st January 1876, and for the next two years the officers and men of the 28th enjoyed another very pleasant posting. The delights of Chinese cuisine were particularly attractive, and sporting contests of shooting, athletics and cricket were enthusiastically supported. The co-operation between the British and the Chinese populations came to produce one of the world’s great entrepots. One officer of the 28th wrote:-

“The city hall, the pier, the graceful Queen’s Road, beginning with comfortable bungalow, substantial banks and shops, and ending westward in the picturesque habitations of the natives, the public gardens worthy of the Flower Empire, the shipping in the harbour, the busy warehouses on shore, the snug bungalows nesting in shrubs and trees and fast creeping up the slope behind the town, all testified to the fertilising influence of European enterprise.

“… Canton and Shanghai supplied out markets. The Chinese cooks would have satisfied Elagabalus. The “Happy Valley” enclosed our race-course. The cricket ground was close to our barracks. Our lives indeed seemed cast in pleasant places. I, for one, find my thoughts willingly recross the bridge of eight years’ absence, and linger fondly among the scenes and memories of our Hongkong life.”

Nevertheless, there was also some ambivalence about the delights of Hong Kong, especially to the military mind. As the curiosities swiftly palled, regimental sports seemed ever more appealing. Our anonymous officer continued:-

“The Chinese ladies with their deformed feet; the cook-shops, wherein a savoury mess, including puppy-dog and rat, was retailed for a penny; the fairy-like appearance of the native streets after dark, with the gaudily painted lanterns swinging from every door; the barbers plying their functions on the pavement; the chairs, whose fat occupants always seemed in inverse ratio to the bearers, gliding down the road; the stalwart Sikh policeman with baton of office; the dread emblem of civil authority, and of terror to evil-doers of native birth, the whipping-post, set up like a guillotine in a conspicuous part of the market-place. The shore boats, worked by female hands, each oarswoman, if a mother, having her young offspring strapped in a satchel behind her back. The huge junks, in shape like William the Norman’s men-of-war, as depicted in the Bayeux tapestry, on his way to the conquest of England, with families of several generations resident on the elevated poop; all these and a hundred other sights, strange to our eyes, were to be seen every day, but failed to impress the military mind so as to make this foreign service attractive to most men; to counter-balance, in fact, the seven months tedium during which Hongkong is not a desirable place of residence. Besides, it has an evil reputation, begotten of early days of mismanagement and official contempt of all sanitary measures. The crowded cemeteries, with tomb-stones that record the death-roll of hundreds in one inscription, attest it. These gloomy witnesses of former great mortality cannot be shaken in their evidence.”

After two years in Hong Kong, the 28th left for Singapore on 4th January 1878.