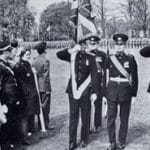 “There was a ripple of applause from the crowd when the 1st Battalion The Gloucestershire Regiment paraded for the last time their Old Colours. These had been presented in the very same park on 26th April, 1952, and since receiving them the Battalion had served in many parts of the world…There were many in Gloucester Park who looked at the Old Colours with particular interest; above all C/Sergeant R.P.Bishop, one of the Colour Escort, the only man actually on parade who had also been on parade nearly a quarter century ago.”
Major Leo Capel, The Back Badge June 1976

The Battalion formed three sides of a square, the Drums were piled, and the New Colours were brought on to parade and laid on the drums by the Regimental Quartermaster. They were then consecrated by the Venerable Archdeacon Peter Mallett, Q.H.C., A.K.C., The Chaplain General, assisted by the Reverend P.C.Cox, Deputy Assistant Chaplain General NW District, The Reverend E.K.Hartley, Senior R.C. Chaplain West Midland District, and The Reverend Brian Sherrington, Chaplain to the 1st Battalion

“I feel very proud to be following in my father’s footsteps – to come to this place to present New Colours as he did, to the Regiment that bears the same name as both my family and also this City. It is singularly fitting that today should be the 25th Anniversary of an event (The Battle of the Imjin in Korea), which made “Gloucester” a name that is a source of pride for every Englishman…

Hopefully it will not be necessary for this Regiment to earn new Battle Honours – but it is a great comfort to lovers of Peace, to know that you soldiers are there, with your skills, your competence and your Regimental Spirit to save us if an when the crisis comes. On behalf of The Queen, and with great pride I commit these Colours to your keeping”

Extract from Address given by HRH The Duke of Gloucester

Her Royal Highness, The Duchess of Gloucester, accompanied by Colonel J.P.Carne, V.C., D.S.O., then moved on to the parade ground and affixed the Solma-Ri Streamer to the pike of the Regimental Colour. The US Presidential Unit Citation awarded to the Glosters in Korea is carried on the Regimental Colour in the form of a blue streamer 4 feet long and 2¾ inches wide embroidered with the name ‘Solma-Ri’

On Sunday, the 25th April 1976, the Old Colours of the 1st Battalion The Gloucestershire Regiment were laid up in Gloucester Cathedral in the presence of The Colonel-in-Chief…. The Colours were received by the Dean, and placed on the Altar. The Dean declaimed, ‘We are gathered together in this Cathedral Church to lay up the Colours of the 1st Battalion The Gloucestershire Regiment. No more fitting place could be found wherein to deposit these emblems of Duty and Service than the House of God, where praise and prayer are wont to be made.’ The Commanding Officer then said, ‘These consecrated Colours, formerly carried on the service of the Queen and Commonwealth, I now deliver into your hands for safe custody within these walls.’ The Dean replied, ‘I receive these Colours for safe custody within the Cathedral Church. Almighty God and Lord of Hosts, we now lay up within this House of Prayer these emblems of Thy Grace and Blessing; may all who look upon them be reminded of their duty to God, their Queen and their Country, for Jesus Christ’s Sake, Amen