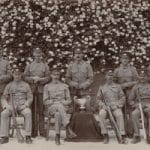 The lessons learned from the Boer War and the looming probability of war in Europe prompted in 1908 the biggest reorganisation of the British Army since 1881, pushed through by the Secretary of State for War, Lord Haldane, in the face of considerable opposition.

The new 4th and 6th Battalions gave up their old full dress uniforms to adopt the scarlet of the regulars, but 5th Battalion retained its rifle green uniform until 1925. The privilege of wearing the Back Badge was not granted to the Territorials until after the Great War. For service dress, the Territorial battalions wore the familiar khaki in which the British Army went to war in 1914.

With reorganisation went retraining. The British army had long appreciated the virtues of rapid and accurate fire, but with modern magazine fed rifles, the problem of ammunition supply became a thorny issue. As with the reorganisation of the army, there was opposition to the introduction of new drill and new tactics. Sir Mark Sykes, who had served in the Boer War, wrote a spoof military manual under the pseudonym of Major-General George D’Ordell called “Tactics and Military Training.” It lampooned the Drill Regulations of 1896, which had guided the British army during the Boer War, and which still had its adherents:

“I have ignored, purposely, the late disastrous campaign in South Africa (well termed “The Grave of Reputations”) because I think that, owing to its irregular conduct, it cannot be fruitful of any lessons to the regular soldier.”

Concerning ammunition supply, D’Ordell satirized and quoted from the 1896 Regulations:

“Strict fire discipline and economical use of ammunition are to be enforced. This is most easily ensured by one round of ammunition only being issued per man. The remainder must be carried in carts or on mules at the base, and in no case should be issued. “Troops are not supposed to be in possession of any ammunition not actually carried.”* This would be fatal.

If the British soldiers of the Boer War had worried about accounting for the ammunition they used in the heat of battle, the Field Service Regulations of 1909 went but a little way to allay their fears:-

“The account of rounds fired by any unit during an action is not the affair of the brigade ammunition column commander. Such accounts must be kept under the orders of the commander of the unit.”

But field training kept ahead of the regulations, and the application of rapid fire, the so-called “Mad Minute”, where soldiers were expected to fire at least fifteen aimed rounds in a minute, could only become the effective tactic it proved to be if the soldiers were adequately issued with ammunition in the first place.

The Infantry Training Manual of August 1914 recognized the realities that would be faced in war and had been highlighted by field training exercises:

“Whenever a collision with the enemy is probable battalion commanders will, on their own initiative, increase the number of rounds carried by each man to 200 from their regimental reserves, taking the necessary steps to replenish their reserves as soon as possible from the brigade reserve. It will usually be advisable to issue these extra rounds from the portion of the regimental reserve not allocated to companies.”

The Regular Army of 1914 proved the point.