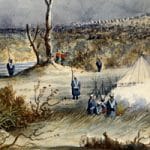 The Second Anglo-Sikh War of 1848-49 followed hot on the heels of the First Anglo-Sikh War of 1845-46. As a result of the first war the Sikhs had ceded Kashmir and accepted the presence of a British minister in Lahore, which gave the East India Company enormous power in the Sikh government. War broke out again in 1848 and the Sikhs were defeated, the entire kingdom of the Punjab being ceded to the British. The Sikhs were always highly regarded as warriors and soldiers by the British and were to become one of the jewels in the British Indian army’s crown until independence in 1947.

The 61st Regiment left Ireland for India in 1845, but were not required to take part in the First Sikh War which broke out in December. In 1848 the 61st joined the Army of the Punjab under General Sir Hugh Gough, in Hoggan’s Brigade of Sir Colin Campbell’s Division. On the 13th January 1849, after fighting its way through the Punjab, Gough’s army was encamped in the cold and wet in front of the village of Chillianwallah. In the afternoon, the Sikhs attacked. George Bace, an officer of the 61st, recorded his experience of the battle:

“The 61st advanced in double quick time, yelling and firing. Soon we passed guns which our rapid advance and destructive fire had caused the enemy to abandon; these were spiked. At length we halted, the foe having fled before us. I’m told that the 46th N.I. [Native Infantry], on our left, kept up pretty well with us, but the 36th N.I., on our right, not only fell back, but behaved shamefully, for when we halted, I looked behind me and saw the 36th N.I. in utter confusion; an armed rabble, more dangerous to friend than foe, inasmuch as the Sepoys were firing in terror and at random; some discharging their muskets straight up towards the sky, others direct to the front, and there were those who, for the sake of diversity probably, pulled the trigger of muskets which they were carrying at the slope. …

“… The 61st met and repelled the enemy in various directions, sometimes they got in rear of us, when we faced about and charged, firing, rear rank in front. In this way I remember we routed a Regiment of Goorchurras, Sikh regular Horse, who had drawn up in our rear and treated us to a discharge of grape from a gun that was on the ground from which we had passed over, and from which they had, I suppose, succeeded in extracting the spike. … ”

The battle was fought to a bloody conclusion, with both sides claiming victory and licking their wounds. On 13th February Gough defeated the Sikhs decisively at the battle of Gujerat, and on March 12th the Sikhs surrendered. But, heavily criticized for his performance, particularly at Chillianwallah, Gough was sacked after the conclusion of the war and replaced by Sir Charles Napier.

Napier later said in an express order to London of the 61st Regiment:

“I am commanded to request that you assure the Secretary of State for War [the Duke of Wellington] that nothing in the whole of the British Army ever was more distinguished than the conduct of the Regiment – 61st Regiment – throughout the late campaign, but more particularly at the Battle of Chillianwallah, where the conduct of the regiment was the admiration of the whole army.

[signed] John Macdonald, Adjt.Genl. of the Army.”
Picture: The British camp before Chillianwallah. Detail from a painting by W.E.D. Deacon. Original in the Soldiers of Gloucestershire Museum.