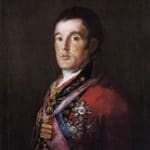 In the summer of 1811, the first battalion of the 28th (North Gloucestershire) Regiment having returned to Gibraltar, set sail for Lisbon to march to join the second Battalion in 2nd Division. The men from 2/28th joined 1/28th, and the officers and NCOs of the former returned to England to recruit. In October the 28th took part in Sir Rowland “Daddy” Hill’s neat little victory over the French under General Girard at Arroyo dos Molinos, and for Wellington’s 1812 campaign Hill’s Corps acted as a distant flank guard while Wellington captured the fortresses of Ciudad Rodrigo and Badajoz, and launched his offensive into central Spain.

Wellington’s army engaged Marshal Marmont’s army outside the city of Salamanca, after much marching and counter-marching, on 22nd July 1812. Wellington baited his trap, and Marmont fell into it. The crisis of the battle came when the French counter-attacked 4th Division’s position in Wellington’s centre. Wellington was prepared for just such an eventuality, and ordered Sir Henry Clinton’s 6th Division to reinforce the gap that threatened to open up in the Anglo-Portuguese line. Major General Hulse’s brigade of 6th Division, on the right and led by the 11th and 61st regiments, drove forward against Bonnet’s Division. 6th Division drove Bonnet’s Division from the field and they took Clausel’s Division with them. But 6th Division’s work was not finished. As they continued to advance they came up against Ferrey’s Division:

“Clinton, it is said, refused to wait till the troops on his right were re-formed, and hurried on the attack: it was growing dark, and a few more minutes of delay would allow the French to make off under cover of the night. Therefore he advanced at once, and found himself engaged at once in a most desperate musketry musketry contest. … ” Sir Charles Oman, “A History of the Peninsular War”.

In 6th Division’s left hand brigade, under Brigadier Hinde, the 32nd Foot lost many men during this attack. Oman continues:

“… But heavy as was the loss of this regiment (137 out of 600 present), it was trifling compared to the loss of its neighbours to the right, in Hulse’s brigade, where the right and centre regiments in the line, the 1/11th and 1/61st, lost respectively 340 men out of 516 and 366 out of 546 – a proportion to which only Albuera could show a parallel. For many minutes – one observer calls it nearly an hour, but the stress of the struggle multiplied time – the two hostile lines continued blazing at each other in the growing dusk. ‘The glare of light caused by the artillery, the continued fire of the musketry, and by the dry grass which had caught fire, gave the face of the hill a terrific appearance: it was one sheet of flame, and Clinton’s men seemed to be attacking a burning mountain, whose crater was defended by a barrier of shining steel.’ The French, so far as losses went, probably suffered no more, or perhaps less, than their assailants: but their casualties were nevertheless appalling. And at last they gave way: ‘the cruel fire cost us many lives,’ writes an officer of the 31st Leger, ‘and at last, slowly, and after having given nearly an hour’s respite to the remainder of the army, Ferey gave back, still protected by his flanking squares, to the very edge of the forest, where he halted our half-destroyed division. Formed in line it still presented a respectable front, and halted, despite of the English batteries, which enfiladed us with a thundering fire. Here Ferey met the form of death which the soldier prefers to all others, he was slain outright by a round-shot.’”

The 61st had lost more men at the battle of Salamanca than any other regiment of Wellington’s army. Major Harry Ross-Lewin of the 32nd in Hinde’s Brigade wrote in his memoir:

“The 61st, which was almost annihilated in this severe action, was by far the finest regiment in the 6th Division.”
Picture: Wellington, painted by Goya.