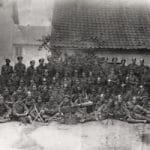 The Gloucesters were fortunate to not have been in action on the first day of the battle of the Somme, when the British Army lost over 19,000 men killed and another 40,000 wounded. But the battle was to continue, relentlessly, with periodic flare-ups, for another four and a half months, by which time British and Empire losses in dead alone had gone beyond 95,000 on the Somme Front. And yet, the British Expeditionary Force of 160,000 that had gone to war in 1914 was, by the end of 1916, over one and a half million strong, nearly a quarter of million of them being Empire troops from Canada, Australia and New Zealand.

1st Battalion went into action at Contalmaison on the night of 16th/17th July. Colour Sergeant Charles Wilson had a good view of the advance, being in the rearmost company:-

“. . . All that the eye could see was masses of men going forward at the walk with bayonets fixed and in dead silence. The Germans panicked and ran for their lives, for they had seen what I had and they evidently didn’t like the look of things. After dawn on the 17th I saw a sight which will seldom be seen again, I saw hundreds of our men out in front of our lines souvenir hunting!! The Germans had been so badly scared that they retired almost a mile.”

Elsewhere on the Somme Front, the Gloucestershire Territorials of 48th Division went into action on the same day. 1/4th Battalion led the attack with 7th Worcesters against the German positions in front of Ovillers. Fortunate for the moment was Lieutenant E.E. Wookey of 1/4th who was far behind the front line recuperating from illness. While his comrades were in the thick of the action, Wookey managed to do some shopping and sightseeing in the town of Arques-la-Bataille, as his diary records with some home thoughts from abroad:-

“A quiet morning. Did some shopping, including an important and very necessary visit to the Banque de France. Visited church of St. Jean close by. A fine old church of ample proportions, pillars reminiscent of Gloucester Cathedral. A quiet afternoon and evening. Weather bad very nearly all day. At 5.30pm I receive a wire from England. It is from father and is my first definite news of their safe arrival in England of which I am very glad. It is sent from Paddington and says that permit to visit me can not be obtained, can I get leave. I ask M.O. but he gives no hope as I expected. I write for evening’s post & address to Weston.”

On 19th July it was the turn of 1/5th Battalion to take up position in the front line trenches, ready to press home 48th Division’s attack at Ovillers the following day. Private William Wood, who was Deputy Editor of the Battalion’s newspaper “The Fifth Glosters Gazette”, recorded in his diary entry of 20th July:-

“The Battalion left for Ovillers-La-Boiselle to engage in the Battle of the Somme. Passing through Albert one noticed the shell-torn church. In the vicinity of La Boiselle one saw the battlefield of July 1st. One heroic group of dead met my gaze on the left of the road. They were all Lewis gunners, and their officer lay out-stretched in the centre of them. The long winding German trench leading to Ovillers-la-Boiselle was littered with German corpses. The relieved Battalion of Worcesters filed past us in the trench, and many of them were in a state of hysteria. HQ Details made a temporary harbour in a spacious down-sloping dugout – fitted up by the Germans as a Dressing Station. At the far end stood the operating table, while on the floor were scattered the ghastly remnants thrown down by the surgeon. The stench was terrible. We all filed into this fearful place until the dugout was packed with men. Most of us threw off our kits. Ten minutes elapsed, and to our horror the gas alarm was raised. I went “cold”, for it was a couple of minutes before I could find my respirator in the darkness amongst the jumbled kits. It turned out to be a false alarm. The Battalion held a portion of a Communication trench leading to Sky Line Trench, while the Germans held the remaining length. A thick barrier of Hun dead thrown up by the Germans separated the combatants.”

1/6th Battalion, the third Gloucester battalion of 48th Division, was thrown into the fight on 23rd July. Captain L. Cameron Nott, one of three brothers who were all killed while fighting with 1/6th, wrote home to his mother:-

“Just a line to tell you how things are going. This fighting has seen some changes in officers & men, all good comrades, killed, wounded or missing have gone from us & our hearts are heavy with their loss.

“Major Coates died splendidly at the head of his men & after he was hit cheered them on continually till he died. With all his faults we mourn a keen & brave soldier.

“Paramour, who was attached to us & who was commanding A Coy, the men say was magnificent, walking about arranging things as if on the barrack square though the ground was literally boiling all round him with machine gun fire. I have never taken such a fancy to a man so quickly; he was only 20, a perfect gentleman & one of the most gallant fellows I ever knew.

“Smith, poor fellow, has died of wounds. I passed him on his way down – though hit in seven places, his courage was wonderful. I asked him how he felt & he said with a smile “There is some lead in me which ought not to be there & I am afraid I have done in your tunic. I am awfully sorry”. I had lent him my old tunic as since he had his commission he had not been able to get leave & get his kit.

“Elliott too died finely, leading on his Coy. Three other Officers are killed. During the fight the Colonel & I had some providential escapes. There were at least 4 direct hits on the dug-out we were in but no one was hurt. The candles were continually going out & once when we were out in the trench a 5.9 landed about 5 yards away.

“The casualties of the N.C.O.’s & men are also heavy & some of them did very fine acts. The VIth [1/6th] failed where no one could have succeeded. The fire was too hot but the way they advanced makes one still more proud to belong to them. . . .”

In Britain, the national press daily reported the weary litany of casualty lists, and local newspapers dutifully recorded in greater detail the lives and deaths of all those who had fallen at the Front. Families received the dreadful news of the deaths of their loved ones from official sources and from the brothers-in-arms of those who had died, whether they were senior officers or close friends. One such local newspaper report recorded the life and death of nineteen year old Private Nelson Griffin of 12th Battalion, The Gloucestershire Regiment (Bristol’s Own)

“. . . who was killed in France on July 29 in an heroic attempt to get his platoon officer, who was badly wounded, under cover.

“Private Griffin was in his 20th year. He was employed by Messrs. R.A. Lister and Co. before war broke out, and enlisted in “Bristol’s Own” on Dec 27 1914. This young hero bore the reputation of being a brave and fearless soldier, and was greatly liked by the officers and men of his regiment, by whom his death is greatly regretted.

“He was a member of the Coaley Parish Church choir, and also a member of the local Bellringers’ Association. In peace days he played in the Uley Brass band and Listers’ Works Band, and was an excellent musician. . . . ”

Sergeant Tristram Risdon, who was later to gain an officer’s commission, wrote to Private Griffin’s father on 7th August:-

“I am writing to you on behalf of the platoon of which your son, Pte NF Griffin was a member, to express to you their deep sympathy on the loss of your son. I can assure you that we have all felt his loss most acutely, as he was quite one of the most popular boys in the company.

“Speaking for myself I can only tell you that I always found your son one of the very best. He was always cheery and willing and never showed the slightest fear even when exposed to hot fire. I may not tell you where he was killed, but I may say that at the time he met his death he was helping to get out platoon officer, who was wounded badly, under cover. It may perhaps be of some consolation to you to know this for he undoubtedly met his death in an unselfish attempt to save another. I am afraid I have not expressed myself very well how much we miss your son, or how deep our sympathy is for you and Mrs Griffin, but I hope you will excuse me for this and will try and understand our feelings. . . . ”

The officer whom Private Griffin and another fatality, Private Charles Blake of Portishead had tried to shelter was 2nd Lieutenant Herbert Ryland, who, while living and working in Jamaica, had enlisted as a private soldier in the Royal Army Medical Corps, and in that capacity had sent back frequent reports to the Jamaican newspapers concerning his experiences on the Western Front. Later he gained his commission in the 12th Gloucesters, and after he was wounded his injuries were reported in both West Indian and Gloucestershire newspapers, he having his origins in the county.

“Lieut. H. C. Ryland, son of Mr. T.H. Ryland, of Stow-on-the-Wold, was severely wounded on July 29. He got over the parapet of his trench with the object of leading his men forward, when the enemy immediately turned a machine gun on him, and he received the charge in his right hip, the femur being fractured. From then till August 1 he passed the time in field ambulances and clearing stations, and then he was admitted to hospital at Rouen, where he is being well attended to. At his father’s request Bom. Raymond Alden, an old chum, visited him and found him quite cheerful.”

The battle of the Somme dragged to its conclusion in November, with little ground having been gained by the Allies. The pressure had been taken off the French army at Verdun, and the coalition held together.

Picture: Soldiers of 1/4th Battalion on the Somme with captured German equipment.