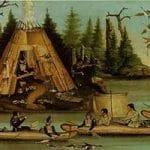 In February 1697 the King appointed Colonel John Gibson to lead an expedition to Newfoundland. This mission was rendered necessary by the headway that the French had made in that colony. Gibson’s command included his own Regiment an artillery train under Colonel Michael Richards, with instructions to protect the interests of the British colonists. They arrived in June, only to discover that they were too late. The settlers had been all but wiped out by the French and their Indian allies, with 224 survivors being removed from the colony in a French ship. The settlement had been entirely destroyed.

Gibson’s men set about rebuilding, fortifying the harbour and constructing a new fort. Most of Gibson’s men left for England on 7th October but two companies were left behind as a garrison, to endure the terrible winter that followed. 214 men out of 300 in those two companies died in that winter leaving around sixty men under Lieutenant Lilburne to garrison the colony through the following winter and beyond.